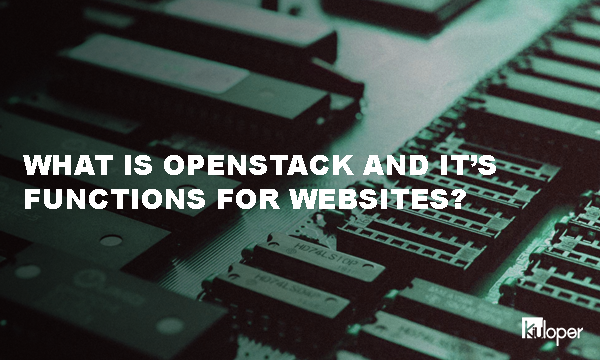 OpenStack is a collection of softwares for creating and managing public cloud platforms. OpenStack is supported by some of the largest software and hosting companies and thousands of community members. Many are of the opinion that OpenStack is the future of cloud computing in the world. OpenStack is managed by a nonprofit organization for monitoring development and community building in relation to this project.

OpenStack allows its users to develop virtual machines and other applications to best manage the different things in the cloud environment. OpenStack makes it easy to scroll horizontally, which means that the tasks rather than being performed concurrently on a specific system, can easily be done on multiple OpenStack users to use much higher processing power.

For example, assume a mobile app that needs servicing to communicate with a server. This application can connect itself to several Open Stack users instead of having a server, so that the operation that it intends to do can run on multiple users with different powers. It can use higher processing power. In fact, Open Stack is a project that tries to put all the users in one set together as a powerful server. Managing the use of these resources is what OpenStack does.

Most importantly, Open Stack is an open source project, which means that anyone who wants to have access to text and Open Stack code can esily do so, if necessary, customize and finally become a free OpenStack member! This means Open Stack has the benefit that thousands of developers worldwide can work in tandem to produce stronger, more robust, and more secure products.

How is OpenStack used in a cloud environment?

The concept of cloud is that it provides processing for end users in a telecommunications environment (for example, the web). This means that real software acts as a service on reliable and powerful servers, not on end-user computers. In fact, the power of the user’s computer does not matter, and all processes are done on cloud servers. Cloud processing offers and suggests a lot, but usually the industry speaks of launching as a service, which is divided into three parts: software, platform, and infrastructure.

OpenStack is designed as Infrastructure as a Service (IaaS). Providing infrastructure means that OpenStack allows users to create new work patterns very quickly and easily. Then, according to the Infrastructure, the Cloud Host can be run. Typically, after Infrastructure, a platform is built, then the developer can design and run self-made application as a software, which ultimately reaches the end user.

What are the different components of OpenStack?

Open Stack has created many of the moving components. Open Stack is a free community, and anyone can add new components or improve existing components, all part of which. The Open Stack core is developed as part of any Open Stack system that has been officially maintained for Open Stack.

Nova: Nova is a major processing engine behind Open Stack. Nova is used to manage a large number of virtual machines within the Open Stack network to handle processing tasks.

Swift: Swift is a storage system for objects and files within the Open Stack suite that is being used.

Cinder: Cinder is a component for storing information blocks, which is more like the traditional concept that a computer will be able to access different places on the hard drive.

Neutron: Neutron provides the ability to launch the Open Stack network. The neutron helps each component in the Open Stack suite communicate with other high-speed components.

Horizon: Horizon is a dashboard behind OpenStack, which is just a graphical interface, so users who want to test and review OpenStack, this is the first OpenStack Component to see. Developers can access all components using the programming interface (API), but the dashboard can give the system administrator the ability to see what’s happening on the Cloud and use it to manage them.

Keystone: Keystone provides Open Stack identity services. In fact, there is a central list of all the users in Open Stack cloud space that is located on this component and user access to various components through this.

Glance: Glance provides image services in Open Stack. In this case, the images refer to the images on the hard disk. Glance allows images to be embedded when a new virtual machine that is being deployed.