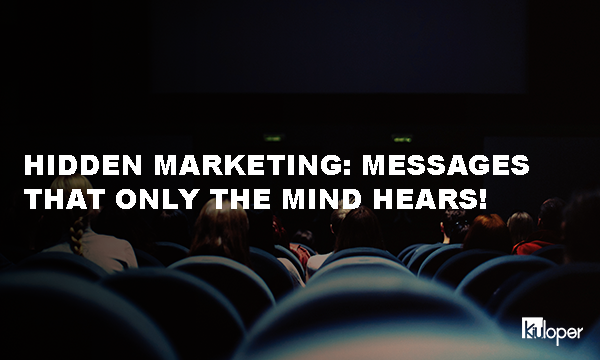 Hidden Marketing: messages that only the mind hears!

The time has changed! The advertising has become so professional and subconscious that you sometimes don’t even know what made you interested in that brand, or why you bought it. Today, we want to go into the most mysterious and secretive type of marketing called “hidden marketing” or “convert marketing” and unravel the secrets that may one day get your mind into play.

What is Hidden Marketing?

Most advertising techniques are straightforward, meaning you are shown the ad and you watch it with full awareness! Now that it doesn’t matter whether you buy it or not, marketing is done. But sometimes the story does not happen so clearly.

In a hidden brand marketing, without realizing it, the message of the brand is sent to your subconscious without knowing the message at all or realizing it is an ad. These hidden messages reject the boundaries of human consciousness and affect their behaviour without realizing it. These are all happening with a piece of quiet music playing in the background or a gentle scent or even the behaviour of the people around us. So subtle and unexpected!

For example, sometimes you may have asked yourself after shopping, why did I buy that product? We always find a reasonable answer to this question, but this is not always the main answer! You may have received a very subtle marketing message from sellers without even realizing it when watching your favourite show online.

Let’s first see where the origin of these messages came from and where the spark of this mysterious affair came from!

How did hidden marketing come about?

The story of hidden marketing messages and their troubles goes back more than 60 years! Mr. James Vicari, a psychologist and marketing researcher, for the first time boldly spoke of the hidden messages. Vicari said he has conducted an experiment to prove that brands can control people’s minds with hidden messages. That is, the audience has no will against these messages, so they can very easily record their message in the subconscious mind.

Mr. Vicari’s research was such that audiences inside the cinema were exposed to covert marketing without knowing about it. During the film a flashing message with the theme: “Hungry? Get Popcorn and Drink Coca-Cola was shown. But viewers were not aware of this message and did not see it! Surprised and wondered how this could be possible?

The conscious mind is able to understand images that are broadcast more than 13 milliseconds, while these messages are displayed every few minutes for 10 milliseconds! Only the subconscious mind can record all these frames. James claimed the experiment was carried out on 45,000 people who came to the cinema, and with these secret messages, Popcorn sales increased 18.1 percent and Coca-Cola sales increased 57 percent.

After the news spread, a wave of anxiety and stress spread among the people. Well, it turns out, they didn’t want their brains controlled by brands! The newspapers and magazines looking for such strange news also fueled the excitement!

The issue of hidden advertising had fallen to the researchers, and everyone was experimenting with it. Several experiments were performed at centers and universities several times, but none yielded significant results and it was not effective in attempting to conclude anything from it!

Experimenting on hidden advertising by the BBC

One of these studies was done by the BBC. The experiment, which involved 98 volunteers, tested the effect of hidden messages on people’s minds. Something similar to James Vicari’s research, but this time with more and more questions and variables!

A Dutch study said that secret messages for a drink brand are only effective when people are thirsty and want a drink! So when the volunteers arrived at the test site, they were given dry biscuits (probably something like our own golden stem) to be thirsty.

The volunteers were divided into two groups. For the first group, a three-minute clip was played where the word Lipton was flashed every 5 seconds for 10 milliseconds.

The second group saw the same clip without these messages. After the movie, they could choose between water and Lipton to quench their thirst! These were:

As you can see, there was no effect of hidden messages in this study. It is true that a lot of research and experimentation was done and rejected all hypotheses, but none could refute the notion that hidden advertising could affect people’s minds. So they didn’t stop this story! Let’s move on to another study to clarify another aspect of this abstraction.

In 1999, Adrian North and his colleagues conducted a survey of customers in a store to investigate the impact of music on consumer behaviour! They wanted to know what effect music had on people’s choice of drink. There were two types of German and French liquor in this store! So some days German songs and some days French songs were played!
Customers would enter the store without knowing anything while the music was playing! When it comes to the shelf, they had to choose between two types of drinks with the same price and taste, German or French!
In the days when German music was being played, people often decided to buy German drinks! But with French music playing, people preferred to buy French drinks!
Interestingly, when customers were interviewed after the purchase and asked if background music had any effect on their choice, only 6 out of 44 people said they were likely to be affected by it and the rest were unaware of the impact of the music.
As you can see, the results of some of the research were positive and some negative, so no one would deny or approve the effect of secret messages and ads and still be used by some brands!

Hidden marketing is a marketing method that promotes a product in a subtle and indirect way to people without realizing that it is advertised. By doing so, they are directing the audience’s mind to their brand and liking their product.

There are various ways to convey secret marketing messages, such as the use of celebrities, fake media, fake talk about a product or brand, the placement of secret messages in company logos and posters, the indirect presence of media and popular places, etc.

Actors or celebrities who use a particular brand’s clothing and products are indirectly promoting a brand. They may not be talking about those products, but that person’s popularity makes them unconsciously models that are promoting the brand.

On some media, blogs and websites you see people talking about their experiences and their daily routine and you don’t see any advertising or marketing in it, but you are actually very subtle and you get a whole lot of secret messages and you are exposed to hidden marketing! Your subconscious is actually recording secret messages!

Often (not always) false discussions, rumours and controversies about a company or brand are another way of marketing the brand. In this way, a rumour or a discussion about the product is made and it goes viral in the virtual space. While everyone in the media and cyberspace is arguing, the marketers of this company are sitting back and watching the magic of advertising from afar!

4. Hidden messages in advertising and logo

Hidden marketing and advertising are especially important for some brands, such as tobacco bans, because they can convey their message to the target audience and not be disturbed or forgotten because of restrictions! But aside from the ban, secret messages are particularly appealing to brands because they can tell a story and convey a feeling to the customer!

5.Products as an army!

Perhaps someone who watches a movie may not at first recognize the hidden advertising of a movie, but it is more common than you think to find companies and brand logos in movies.

Suppose, for example, in a movie sequence, families are sitting and eating coffee and talking about some random things! You’re watching the movie but you don’t realize that they are sitting in Starbucks!

You’ve seen that hidden marketing is still used in a variety of ways, all of which contain important and secret messages that are going to be passed on from brand to customer. The emotions and influences that these messages create unconsciously increase brand popularity and sales. Rest assured, this type of marketing is getting more and more popular every day for the same reasons we mentioned in the introduction!

Previous articleHow to write a successful title for your SEO!
Next articleFrom Mobilegeddon to Mobile First Index