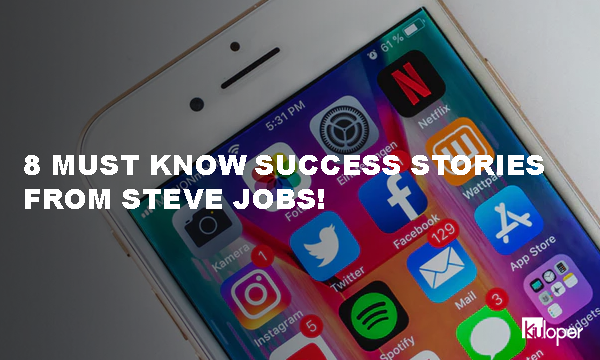 Steve Jobs is one of the founders of Apple’s Big Company, and one of the world’s technologies myths. The process of his life and his success can be inspirational to anyone. Without his insight and persistence on the subject of Apple computers, the technology market today would not have been the same. He focused on building great products and always tried to make something that other people believe would be impossible.

In this article, we are going to tell you eight successes from Steve Jobs, which we can understand in our story of life and his words.

1. Begin with a product

If we learned anything from Steve Jobs, it was that he always focused on products, and he was always trying to make it even better. He has always had a perspective on the products he wanted to create, and that’s what made him succeed.

Focusing on creating a good brand and product apart from helping them, but also the tempt to always make it better and more effective is what made Steve Jobs the person that we know now. If your product is made for a low or moderate quality, then know that it can not stay and sell a lot.

If you only see your income and resources, then know that your product is not going to get anywhere. But if you concentrate on designing a great product, know that financial resources come with it.

2. Keep yourself separate from others

When Apple started making Macs, they decided to make something completely separate from the rest, and eventually they made something that other companies could not design.

Apple showed that to succeed in a busy market you need to keep yourself separate from the rest. The ultimate outlet for this issue was nothing but success for Apple. It’s quite obvious that Apple is among the companies that have been developing new gadgets and innovative ideas for all companies.

You can get quotes, oppose them, celebrate them or talk to them, just what you can not do is to ignore them, because they change everything. They advance a person to progress, some people may think of them as a bunch of crazy people, but they are geniuses because they are so crazy that they think they can change the world, and in principle, they are the only ones who can do that.

3. You must be stable and steady

To become a successful leader in specific fields and build a successful business, you need to be stable. This is not a simple matter, but if it was, everybody would have succeeded in doing some random business. Steven Jobs worked hard over the time he was in Apple, just so that he could turn it into something that we see today.

It is important to maintain sustainability in your work. It’s a temptation to leave your idea and business before you fully succeed, however, you need to keep it up.

4. Quality is more than one layer

Steve Jobs was the one who always focused on the fact that the product should be excellent. Jobs was really a perfectionist. He was never convinced that he could ignore or overcome parts of his work.

It’s very easy to focus on having a theme and perfect it as much as possible and neglect other things, such as the user experience. If you are the one who is trying to produce a successful product, you should control its quality in all aspects.

In short, Apple is one of the technology innovators among different companies. Steven Jobs has always tried to make something new.

Innovation is the key to growth, and when you can not bring innovation to the business environment, someone else simply arrives and takes your place.

Innovation to meet people in the hallways, nightly calls at 10:30 PM when you have a new idea or when a problem is created for someone and you are looking for a way to resolve it. That is what you need to have and keep.

One of the famous sayings made by Steve Jobs at Stanford University was that you can not connect the points forward, you can only check them back.

This means that you have to believe in yourself and believe that the points can be connected in the future.

If you only believe that everything will eventually work properly, then know that ultimately your efforts will be much harder and you will need to work more and more, but you will succeed.

However, if you do not believe that what you do today is affecting your future, then let me assure you that your workflow will fall and everything will get slower.

You need to believe in the concept that everything will eventually be connected in the near future and then you will succeed.

7. Keep on loving what you are doing

Surely Steve Jobs is not the only one who believes that you will succeed. Love the work you do. Meanwhile, there are many people who do things that they do not like. They do it just because they are finally given a prize and that’s what people are falling on.

They have a lot of work to do that they do not like, they waste their time and struggle to get out of their work.

On the other hand, it’s not hard to succeed in the area you love. You do so with pleasure and you will always be happy with it. In such a case, time does not matter to you, and you will never emphasize when you put it to hard work.

If you do not love what you do, do not refuse to work an extra week. If you want to challenge yourself, go for an overnight job in a field that you at least love.

8.Use all your strength and energy for this

For your work, give it 100% of your attention, working just for a short period of time, and such things just keep you from progress and it keeps you away from success. Especially in a world where your efforts often fail, then you should try to get back up again.

Here you can see the general Steve Jobs lessons:

Previous articleWordPress security with Wordfence
Next articleEarning money from blogging